As shoppers flood the stores today, Black Friday, for the official start of the holiday shopping season, I thought I would offer a few gift ideas of my own.  Over the next few weeks, I have some great present suggestions for those of us who have run out of original ideas.  Some of them are local companies that offer great products, some are super original, and others just a lot of fun!

Last Friday night, I attended a book signing for a new book by Jon Tiffany called Eleanor Lambert: Still Here.  The book signing was held at Luna, a trendy boutique on Sacramento St. in the Presidio Heights neighborhood of  San Francisco.  Ian Mackintosh, the Director of Public Relations for the Academy of Art University’s school of Fashion, invited me and worked alongside Tiffany, for the iconic Eleanor Lambert.  Miss Lambert, as Tiffany always refers to her, was a public relations extraordinaire, before most people knew what a PR person was.  Tiffany is animated and fun to talk to and has an easy going way about him.  He speaks enthusiastically about both Miss Lambert and the book.  It’s easy to see that this book was a labor of love that started with an idea, was originally going to be a documentary, and ended with this beautiful “coffee table” book. 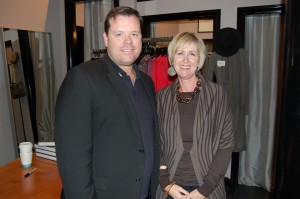 Amazon.com describes the book: Eleanor Lambert: Still Here is a look into the life, career, and accomplishments of world-renowned American press agent Eleanor Lambert, as told through the experience of her assistant and fashion historian, John Tiffany.

John Tiffany has over 20 years of experience in public relations, event production, branding, marketing, and sponsorship projects around the world, founding his own consulting business in New York. Early on, Tiffany was mentored by the legendary Eleanor Lambert. 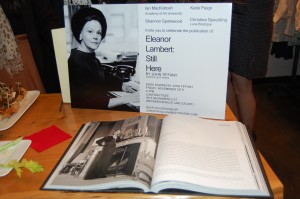 Mackintosh also worked for Miss Lambert in New York for 6 years.  Mackintosh worked for other well known fashion PR firms before making the move to San Francisco to head up public relations for the school of fashion at AAU in Downtown San Francisco.

The book has received great coverage from Harper’s Bazaar, Women’s Wear Daily, The Wall Street Journal, The Washington Post, Chicago Tribune, and others.

Some Eleanor Lambert trivia:
-She organized the semi-annual Fashion Press Week in New York as a coordinated schedule of  designer collections for the international press. She initiated a similar schedule for the European fashion capitals establishing the coordinated centralized showings now followed around the world.
-She founded the Costume Institute at the Metropolitan Museum of Art and initiated the idea of the Costume Institute Gala, the preeminent social event for decades in New York.
-She founded the Council of Fashion Designers of America (CFDA)
-She founded and coordinator of the International Best Dressed List (now coordinated by Vanity Fair magazine)

The book is available at amazon.com and makes a GREAT holiday gift for the fashionista in your life.

A revolution in pants!

Many months back Tina Ketchie Stearns contacted me, asking if I would try her great new product, “Go Free Pants”.  I was intrigued, to say the least.  Several weeks and pant sizes later, my Go Free pants arrived.  I chose the 5- Pocket Jean in Black.  I was thrilled to get them and tried them on immediately.  Here is what Tina says about how and why Go Free pants came to be:

“I was watching The Today Show while they were interviewing a female doctor about women’s health issues including postpartum depression, breast cancer and heart disease. Regarding bladder and yeast infections, the doctor said, “The less women wear down there, the better.” My own mother had told me that for years. About a week later, I was at our monthly “Girls Night Out”, and I told my friends what the doctor on the Today Show had said. That’s when several of my girl friends admitted that they go “commando” (no underwear). I had no idea! A few of the girls said they wear thongs to get rid of panty lines. I was a “granny pant” girl! My friends are all lovely ladies of every shape and size, but not what I imagined a thong or commando type to be. They encouraged me to try it, so I did.”

That was really the start of this new concept in pants.  You’ve heard of and probably seen the “camel toe” effect…a pant that is too tight and rides up the middle of a ladies’ privates.  NOT a flattering look!  The way the Go Free pants are constructed is really unique, because there is no middle seam, rather a sewn in “panel” that is comfortable and flattering!  The great thing about this pant is that undergarments are optional, you can wear them if you want and don’t need to if you choose.  Tina’s success is catching on and she gave many pairs of Go Free pants away to celebrities at the Oscar Week Suite Hilton Beverly Hills event she attended in February, and got fabulous reviews.

Now, what about the pants, you ask???  I loved wearing these pants!  First of all, the fabric is a cotton twill with stretch…translation, they are SOOOOO comfortable.  No more dying to get out of your pants and into your sweats when you get home.  The fabric is light enough for summer, and heavy enough for winter (at least in the San Francisco bay area).  They don’t lose their shape as the day goes on, and they really “breathe” down there!  The only issue I had was that the length is not very long.  I am 5’5” and they would have been short on someone taller.  They come in a 32” inseam and 29” for petites. One of the best selling points of these pants is that they retail for $74-$84, a really affordable price point!  Even better, Go Free pants donates a portion of proceeds to non-profits like Hospice and cancer research…a win/win all around!